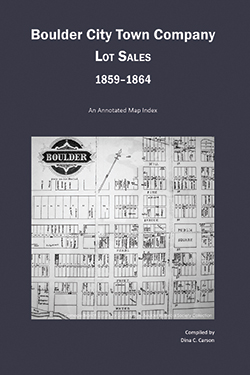 The original records of the Boulder City Town Company show the initial land lottery of 11 Aug 1859 along with the sale and transfer of different lots beginning just after the town’s beginning on 10 Feb 1859 until 1864. This map index details the land sales and shows each lot sold or transferred. Because no original survey map of Boulder City exists, a map was created using the plat map of 1864, an 1868 map that shows a partial view of downtown, and the 1871 and 1887 maps that use the old numbering system from the original survey. None of the extant maps shows the entire original survey, but the blocks and block numbers of the created map are almost exactly the same. The two exceptions are an unnumbered block where the courthouse stands currently (between 13th and 14th Streets, and Pearl and Spruce Streets), and an unnumbered block between 16th and 17th Streets, and Hill [now Mapleton] and Bluff Streets. I believe these two lots were intended to be left unnumbered and used as public squares—one for the courthouse, the other for a school, perhaps. This book shows each land sale along with a mini-view of the block in question with the street names along all four sides of the block for reference.