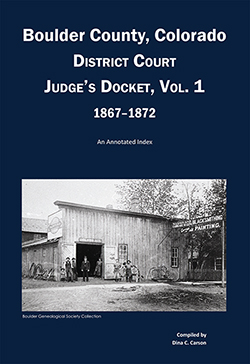 Boulder did not have a courthouse until 1867 and many of the cases that occurred before that time were sent to Golden in Jefferson County or Denver in Arapahoe County. After the courthouse was built, many of those cases were returned to Boulder. The docket lists the plaintiffs and defendants, often lists which attorneys represented which side in the case, gives the docket number in the Grand Docket, and has the judge’s notes for how the case is proceeding or the verdict, where appropriate.