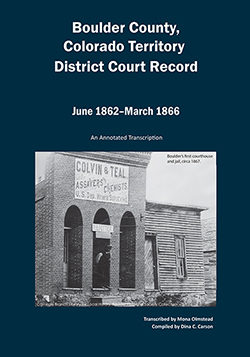 The Boulder County, Colorado Territory District Court Record, June 1862–March 1866 is the first known court record for Boulder County. Many of the early cases were presided over by Stephen Selwyn Harding who was the Governor of the Utah Territory prior to becoming the Chief Justice of the Colorado Territorial Supreme Court. The record includes much of the work of the early court including calling petit and grand jurors, hearing civil and criminal cases as well as deciding who was qualified to act as an attorney in court.