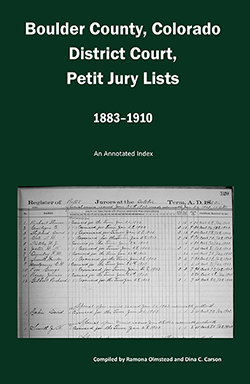 The Boulder County, Colorado District Court, Petit Jury Lists, 1883–1910 is an annotated index of the District Court’s call for men to serve mostly as petit jurors. There are a few entries for Grand Jurors or Talesmen, essentially an alternate who was available if there were an insufficient number of jurors. There are more than 4,000 entries in this volume. The lists were most likely kept by the Clerk of the District Court, although the clerks are not named anywhere in the volume. Often the record gives the dates that a juror served during the court’s term. It is rare for jurors to serve throughout a term. Most jurors served a few days. Some records indicate what the juror was paid for his service. Many records indicate that a juror was “excused for the term,” which did not necessarily mean that the person did not serve at all, only that they did not serve for the entire six month term.