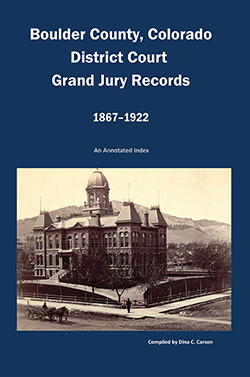 The Boulder County, Colorado District Court, Grand Jury Records, 1867-1922 is an annotated index of the records of District Court requesting men for service as grand jurors. Grand Jurors were summoned to examine cases in order to issue indictments but they were also used to examine public financial records and the safety of public buildings. Several special cases are found in this record set, including those investigating “considerable lawlessness especially in the illicit traffic of liquor and gambling,” and the Grand Jury statements of May Bradford Oles who was the adopted daughter of Andrew J Macky (a prominent Boulder citizen) and her attempt to claim a part of his large estate.