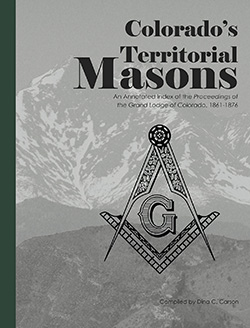 The Masons have a history in Colorado longer than the state or territory itself. The first Masonic lodges formed in the area were done so under dispensation from the Grand Lodges of Kansas and Nebraska until Colorado became a Territory in 1861 and formed its own Grand Lodge. Between the time Colorado became a territory in 1861 and a state in 1876, thirty-one Masonic lodges were formed with the help of more than 4,000 local men whose names are included in this index. The Proceedings of the Grand Lodge of Colorado often included news from Masons in other states, as well as the names of officers of the other Grand Lodges around the county. Their names are also included.