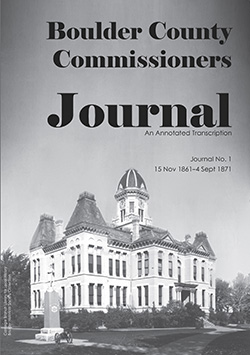 Boulder County was one of the original 17 counties established when Colorado became a territory on 14 February 1861. The Boulder County Commissioner’s Journal, 1861-1871, chronicles the building of the county and the people who helped build it. During that time, citizens in Boulder built new roads, a jail and a courthouse, paid for the care and keep of paupers, and maintained law and order. All the while, the County Commissioners hired and paid for work on behalf of the county, chose grand and petit jurors, appointed road viewers and overseers, and took applications for business licenses. Includes an index to the original journal as well as an index to this modern version.